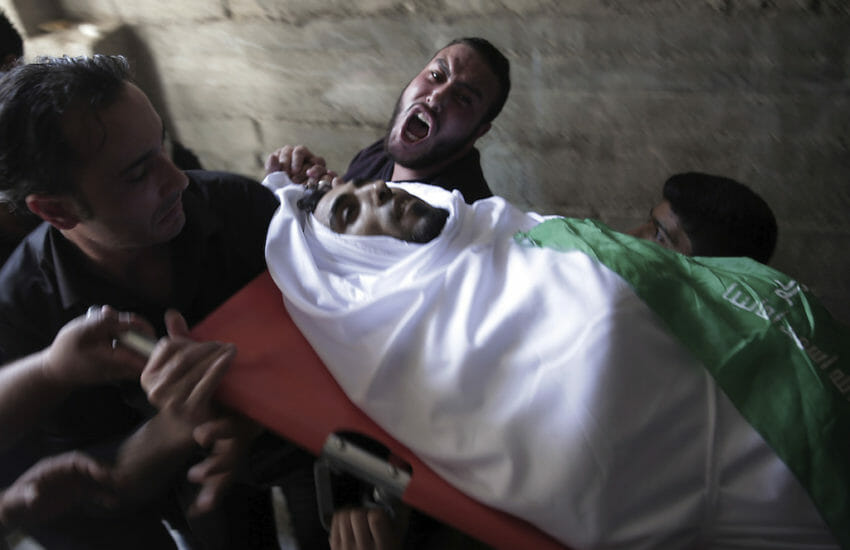 For a writer, any criticism of Israeli military action is a veritable “third-rail” in American politics. Touch that nerve and you’re open to charges of anti-Semitism or worse.

Still, recent events in Gaza demand that some of us, at least, shed light on the plight of Palestinians.

Let us begin with a thought experiment: imagine dozens of unarmed, protesting Caucasian Christians or Jews—say, Israelis or Europeans—were shot dead by heavily armed brown folks, like, say Palestinian Muslims. What would we call this? That’s easy: terrorism. How would the media cover such an event? Simple: extensively and emotionally, probably for many days. The smiling faces of the victims would be splashed across the screens of television networks from Fox News to MSNBC.

Heck, for proof just look to the recent past: terror attacks in France and Belgium, for instance. Certainly, even decades back, Americans demonstrated more empathy for white, Christian victims. When, in 1972, British paratroopers fired into a crowd of demonstrators in Northern Ireland, killing thirteen, the episode was christened Bloody Sunday. I come from a city (New York) where sympathy for the catholic Irish was so robust that certain bars overtly collected money in tip jars for “terrorists” in the IRA well into the 1990s.

Well, something remarkably similar has occurred over the last two weeks, as thousands of Palestinians—protesting the deplorable conditions for the 1.8 million human beings besieged in Gaza – were subjected to Israeli Army gunfire that has left dozens dead and hundreds wounded. To date, not a single Israeli has been killed. This is typical of the recurrent violent episodes in Gaza. Scores or hundreds of Palestinians die—often including many women and children—whilst a few, if any, Israelis are killed or wounded. Still, mainstream U.S. media covers each incident as though there is parity of blame, responsibility, and suffering. It’s a very old and very persistent farce.

Language is a weapon in the semantic combat of the war for Palestine. In the American media, Israeli gunfire is a “response” to Palestinian “actions.” It is never a “massacre,” never a war crime. The very soil on which these events occur are dubbed “territories,” not a Palestinian homeland promised by successive UN Resolutions, not as a space illegally occupied by Israeli’s military as part of what is, in truth, a far right-wing settler colonial project.

Silence is also a weapon, and it’s wielded skillfully by corporate media personalities (or celebrities) running the gamut from Sean Hannity to Rachel Maddow. No doubt, the Gaza story-that-isn’t will be drowned out by the prospective for escalation of America’s already ill-advised war in Syria. But, see, it’s not just that. Last night I sat on my couch reading a marvelous, compassionate, fair article on the Gaza crisis from former CIA veteran Paul Pillar. I quoted a passage from his powerful text, then, as a demonstration for my wife, clicked on the television. CNN and MSNBC were focused on Stormy Daniels, Russia gate, and raids on Trump’s lawyer’s property. FOX, appropriately, had Alan Dershowitz—the wildly pro-Israeli hawk—on as a guest, and even he wasn’t talking about Gaza.

Americans, by and large, don’t care about the Palestinians. They’re busy scrounging a living and struggling to get by in an era of wage stagnation. They’ve only so much empathy to go around. Besides, even if they wanted to know about the violence, even if they might be sympathetic to the plight of Gazans, our corporate media ensures their ignorance. The ongoing massacre in Gaza is, when critically analyzing our media space, the dog that doesn’t bark.

We have neither the time, nor the collective energy to recount the scope of the problem, the full history of Israel/Palestine. For those interested, I’d suggest you start with Israeli historian Ilan Pappe’s “The Biggest Prison on Earth: A History of the Occupied Territories.” For our purposes, let us instead examine just one stated grievance of the Gazan protesters. They seek recognition of their right to return. To where, you ask? To the homes and lands their parents and grandparents fled or were forced from in the face of Israeli Army offensives in 1948-49. Some families even keep the actual keys to their old homes, heirlooms of an injustice imposed. And here’s where matters get complicated.

The Palestinians are never likely to actually return to those homes. Many no longer exist. Most are occupied by Israeli families for whom the story of ’48 is a distant memory of a crime they, to be fair, didn’t commit. It’s unrealistic—even if that’s deeply unfair—to assume hundreds of thousands of Palestinians (most of whom are rather young) will someday dislodge all those Israeli citizens and recreate a village life that no longer exists. We have to get real.

The protests, though, are authentic, honorable, and explicable. And yes, I’m even including the angry youths tossing stones and rolling burning tires. I may not approve of the methods, but as Martin Luther King Jr. once said of America’s urban unrest, “I think we have to see that a riot is the language of the unheard.”

The people of Gaza, 1.8 million of them, are blockaded in one of the most densely-populated strips of land on this planet. They are denied the civil rights of Israelis or citizenship in their own national state. They live in a sort of socio-political limbo, with spotty electricity, poor sanitation, soaring unemployment, and gripping poverty. Gaza has regularly been referred to—at least among the few analysts who care to study this forgotten spot of earth—as one, large “open air prison.”

For what crime are these Palestinians being incarcerated? For being Muslim, of course, for not being Jewish, for not simply fading away. They cannot, we are told, receive any relief so long as they support “terrorists.” By this, the Israelis mean that Palestinians are to be punished for voting the wrong way, and choosing Hamas in what international monitors admit was a free and fair election. Democracy is a tricky thing, after all. Hamas, to be fair, has moderated from its earliest, extreme-Islamist, manifestations. It has offered truces with the Israeli government. And Hamas, ironically, gains support the more that Palestinians are kept under an Israeli thumb. This is, like so much American policy in the Mid-East, counterproductive to the point of absurdity.

So what can be done, how can tensions be cooled, and some sort of fairness ensured? It’s hard to know, actually. There are no easy answers and malign actors exist on both sides. Some Palestinians are terrorists; most, however, are not. Still, I’d suggest the Israeli state—and the international community—must at least recognize the earlier injustice inflicted on the Gazan refugees; perhaps accept their symbolic right of return, and offer tangible reparations, as well as a genuine path to independent statehood along with the West Bank.

It’s not so unheard of, by the way. Reparations is a dirty word in U.S. discourse, conjuring as it does images of supposedly unworthy, whining African-American “complainers.” Leaving that problematic framing aside, other countries have successfully granted reparations for marginalized communities. Australia has officially apologized and paid monetary reparations to what remains of their displaced—and nearly destroyed—aboriginal population. Canada, too, apologized to its aboriginal people (which it refers to as First Nations), and has paid lump sums to thousands of natives. Israel, like the United States, is a proud, rich nation and loathe to admit error or pay out damages. Still, there is strength—and prudence—in contrition.

With this I’ll close, for now. Before the accusations of this author’s anti-Semitism and naivety commence, listen closely to what I am saying: this seventy year conflict is complex and ever-changing. There is plenty of blame to go around. Israel has a right to exist as a state and its citizens ought to expect a reasonable degree of security.

What Israel may not demand is some fantasy of absolute security from any and all threats (which no country, not even the U.S., can ever achieve), the continued right to flout international law, and to maintain hegemony from the Mediterranean Sea to the Jordan River. And that is because the inverse of my assertion of basic Israeli rights is equally true: Palestinians have a right to exist as a state, to demand full civil and political entitlements, and a reasonable degree of security.

In truth, after seventy years of failure, and the long track record of one-sided support America has shown toward Israel, I’m no longer optimistic about the prospects for a two-state solution. That said, as a lowly soldier who spent countless hours receiving ear-fulls of criticism of U.S.-Palestine policy from distant Afghans and Iraqis, I am certain of one thing: America’s unjust favoritism of Israel places U.S. servicemen at risk in the Middle East.

Israel has a choice. It purportedly desires to be three things: Jewish, democratic, and expansive—encompassing all territory from the Mediterranean to the Jordan. It can be any two, but not all three. If it is to be expansive and democratic, then it must absorb millions of Palestinians—at which point it ceases to be Jewish. If it continues to deny statehood or full civil rights to the Palestinians, but remains expansive—it is no longer democratic. The best path seems obvious: a less expansive Israel that allows a genuine Palestinian nation-state its own sovereignty. Only, so long as the right-wing Likud Party of Prime Minister Benjamin Netanyahu is paramount, that solution is off the table.

And so, America too, has a choice. It can be a fair arbiter, truly the “beacon of democracy” it boisterously bills itself. Or, it can continue to favor Israel and ignore the plight of Palestinians.

If the U.S. ever hopes to win back friends on the Arab Street, demonstrate consistency in its application of international law, or just live up to its own purported values, well, then, the empathy gap must close. Palestinians are as human as Israelis, who are as human as Americans.

It is time to act accordingly.