PFC – Russian
Домой Awakening DISGUSTING: Study finds that animal vaccines have no safeguards against contamination and... 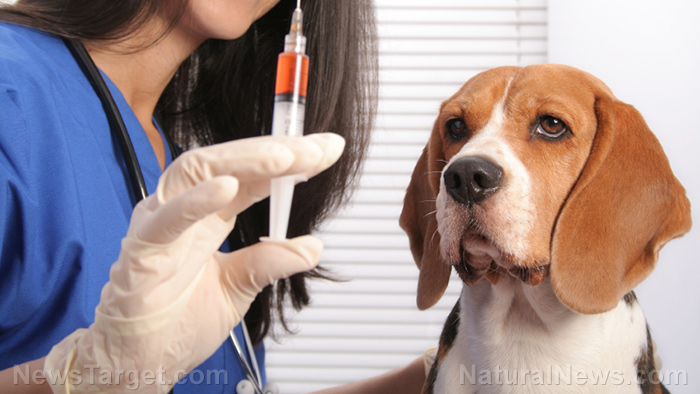 Most of us are incredibly attached to our pets. As such, we do everything we can to prevent them from getting ill, including getting them vaccinated at the intervals recommended on the schedules we receive from their veterinarians. What we might not realize, however, is that in getting them vaccinated we may be exposing them to very dangerous retroviruses, some of which have been linked to cancer and other fatal animal diseases.

A study recently published in the journal Biologicals, entitled “Endogenous retroviruses as potential hazards for vaccines,” warns that the way in which animal vaccines are manufactured leaves them vulnerable to contamination by retroviruses which are present in the master seed stock of the cells used in their production.

The manufacture of both human and animal vaccines is dependent on the use of live human and animal cells as seed stock. Unfortunately, as noted by GreenMedInfo, many of these cells are contaminated with endogenous retroviruses (ERVs). When animal vaccines that have been created using contaminated cells are injected into our furry friends, these illnesses can be handed over along with the vaccine’s “normal” contents.

The study, which was conducted by researchers from the department of cell biology at Kyoto University in Japan, found that the risks associated with such vaccines have largely been ignored, leaving our pets vulnerable to serious diseases, including feline leukemia, the primary cancer diagnosed in cats. (Related: Read about other possible dangers for your feline friends at PetHealth.news)

Get more news like this without being censored: Get the Natural News app for your mobile devices. Enjoy uncensored news, lab test results, videos, podcasts and more. Bypass all the unfair censorship by Google, Facebook, YouTube and Twitter. Get your daily news and videos directly from the source! Download here.

Feline leukemia is of particular concern to cat lovers, as it affects between 2 and 3 percent of all cats in the United States, and up to 30 percent of cats who are already battling other illnesses.

Cats persistently infected with [Feline Leukemia Virus] FeLV serve as sources of infection for other cats. The virus is shed in saliva, nasal secretions, urine, feces, and milk of infected cats. Cat-to-cat transfer of the virus may occur from a bite wound, during mutual grooming, and (rarely) through the shared use of litter boxes and feeding dishes. Transmission can also take place from an infected mother cat to her kittens, either before they are born or while they are nursing.

And now, the Kyoto University study has confirmed that another possible avenue of infection is through the very vaccines we give our cats to prevent them from getting sick.

So, what exactly are retroviruses, and why are they so difficult to fight off?

A YouTube video by the Sci Show, entitled “Retroviruses: Microbial supervillains” explains that while our bodies (and those of our animal friends) can produce antibodies that recognize and destroy cells infected with viruses before they get too out of hand, retroviruses operate in a completely different way – a way that the body does not identify and therefore does not fight off effectively:

[Retroviruses] get their supervillain status because of an enzyme called reverse transcriptase, which reads the virus’s RNA and turns it into DNA, which then makes its way into the cell’s DNA and attaches itself. Once the retroviral DNA is in the cell’s DNA, the cell just starts copying the new DNA along with its own. After the retroviral DNA infects the cell it can lie dormant for a while before it activates itself. On top of that, these viruses are reproduced a ton, so it provides lots of opportunities for mutation. All of this makes it incredibly difficult for the immune system to fight them off.

Purposely injecting these dangerous retroviruses into our pets just doesn’t make much sense, does it? So, if you really love your best friend, keep him healthy through his diet and exercise and skip the vaccinations. (Related: Pet vaccines are costly, toxic and dangerous – no wonder pets die early now.)