Plasma Worm Attacking Us All – Now’s Our Chance to Fight Back!

… and the entity knows this

… which is why the attacks on Lightworkers are so fierce right now.

By the Unknown Lightwarrior 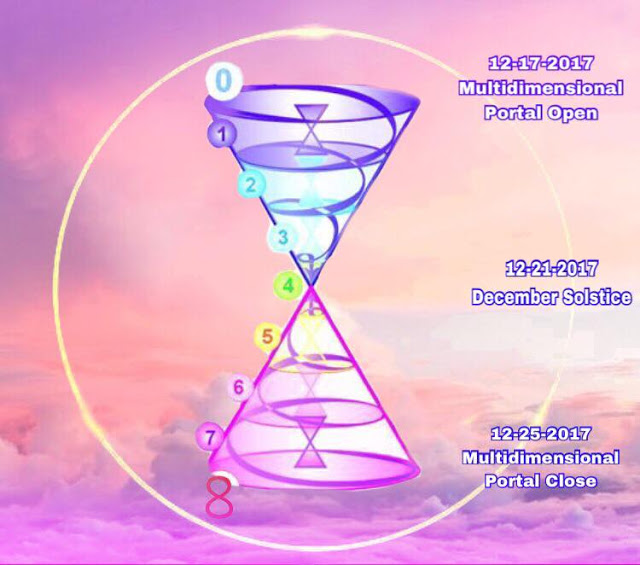 The plasmoid entity that Cobra has described is attacking lightworkers!

“I will mention two of those plasmoid entities here and they will be cleared and removed exactly in the same way as Yaldabaoth.The first one is a wormlike entity that was teleported through the Congo portal from Rigel star system between 1996 and 1999. This entity is trying to cut the surface population from Light, it is trying to suppress spiritual growth and the Ascension process. This entity is carrying the vast majority of all still existing advanced plasma scalar weapons in its body and is using an advanced fuzzy logic computer program to direct those weapons to suppress Lightworkers and Lightwarriors as much as possible. The removal of this entity is top priority for the Light forces right now.”

But we have a chance to dissolve this plasmoid wormlike entity forever…..and the entity knows this….that’s why the attacks on lightworkers are so fierce now.

When we start to anchor much more light on the planet…..starting tomorrow, December 17th …..at the opening of the Multidimensional portal around the Winter Solstice….this plasmoid wormlike entity will begin to dissolve.

Please help us spread this meditation….and help us make this meditation viral by committing to posting about it in 10 places (or informing 10 different groups of people). If everyone reading this post commits to this, we can achieve critical mass!

As described in the Situation Update in Cobra’s post on December 7th:

“There is a full scale battle for planet Earth ongoing on the plasma plane in sublunar space right now. The light forces are focused on removing the wormlike plasmoid entity that has entered our Solar system from Orion in 1996 and is now wound up around planet Earth

Reactions of this entity and all lesser plasmoid entities living inside its body with their exotic plasma weapons are creating brutal scalar attacks on Lightworkers and Lightwarriors recently.”

Over the next 9 days from tomorrow, we as a group of Lightworkers and Lightwarriors have a great opportunity to help the Light Forces in this situation:

“A multidimensional portal to the Galactic Center will open from December 17th to December 25th with the turning point on December 21st , that will drastically change the conditions of the plasma plane in most of the sublunar space. This portal is partially accurately described here:

Also, as described by Untwine, at every Winter Solstice between 1975 and 2025, our solar system is aligned in a straight line with the galactic plane and therefore the Galactic Central Sun.

We therefore receive a flash of energy from the Central Sun every Winter Solstice. We can use this to align ourselves with the Light, and let it flow throughout our solar system to help bring the Event.

In collaboration with the global Prepare For Change team which has organized a global synchronized meditation at the exact time of December Solstice on December 21st, as well as in agreement with Cobra, we are proposing to do the December Solstice Meditation throughout the entire window of multidimensional portal opening at 2:30 PM GMT/UTC.

By doing this mass meditation over the period of portal opening, we can use our group consciousness to create a strong intention to speed up the process of clearing all exotic weapons on the plasma plane and in sub lunar space to trigger the mass arrests, disclosure and The Event.

Scientific studies have confirmed positive effects of mass meditations on human society, so each of you that will participate in this meditation can actually help to bring The Event and Full Disclosure closer to us:

We received this code through dragon contacts in Asia as a key to accelerating The Event. We will issue this decree just before doing the Multidimensional Portal Meditation. 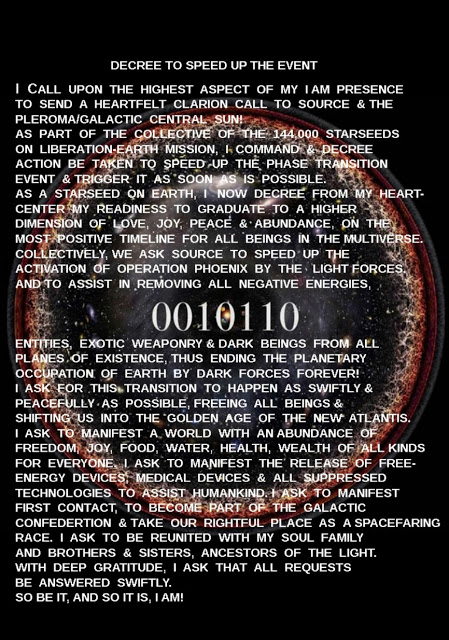 It is recommended to use it as a meditation tool to focus our intention towards achieving this goal.  Combining it with Light Mandalas also greatly enhances its function. It’s a binary key code to alignment with the power of the Galactic Central Sun. It also expresses a “Zero Point Function” wherein 001 and 110 are mirrored inverse resulting in the central “zero” alignment with the Source centre.

After this meditation, which will finish at approximately 2:45 PM GMT/UTC, with our mind still in the meditative state, we can also perform the Command PB Stardust protocol developed by The Pleiadians and which is a gift to humanity.

The Pleiadians will then use their advanced technologies to access your central nervous system to ease any of our chronic pains:

You can convert GMT/UTC timezone into your local timezone using the link below:

Here is the link to join the worldwide synchronized meditation at the exact moment of the December Solstice on December 21st at 4:28 PM GMT/UTC, and interact with other meditators on PrepareForChange/coeo:

And the link to join this Event on Facebook:

We have also created a Facebook event for the Command PB Stardust protocol as a reminder:

The Facebook event for the multidimensional portal meditation is here:

Below are the instructions for the December Solstice Meditation, created by Prepare for Change:

1. Relax your body, emotions, and mind by focusing on your breath or in any other way that works for you.

2. State your intent to use this meditation as a tool to bring peace, justice, freedom, and abundance to Planet Earth and her inhabitants.

3. Visualize a pillar of Light emanating from the Galactic Central Sun, then going through all beings of Light inside our Solar System, through the Sun and the Moon and then through your Soul Star Chakra and through your body to the center of the Earth.

4. Now visualize another pillar of Light rising from the center of Gaia up through your body and upwards into the sky towards all beings of Light in our solar system and our galaxy.

6. Visualize a vortex of brilliant white Light descending from the I AM presence into the soul star chakra of every lightworker on Earth. Visualize the higher selves of the 144,000 activating as they awaken to their respective missions.

7. Visualize a vortex of brilliant white Light descending from the I AM presence into the soul star chakra of every human being on Earth and into their energy fields and personalities, awakening them to the reality of Light, giving them the power to finally set themselves free from darkness.

8. See this collective beam of light expanding itself into the Earth’s Light Grid, and connecting to the heart of Gaia.

9. See every living being on Earth connecting to their soul families and spiritual guides as this collective beam of light spreads out along the energy grid of the Earth.

10. See this Light continue to expand throughout the Earth and throughout the entire solar system, connecting to the soul star chakras of the Agarthans, the Ashtar Command, the Pleiadians, the Sirians, the Andromedans, the Arcturians, the Lyrans, the Galactic Confederation, and all beings of light who are guiding and supporting humanity through Earth’s Ascension.

11. See the Goddess energy spiraling down through all these layers of expanding Light, bringing peace, harmony, and liberation to Planet Earth.

Guided audios for this meditation have already been created in 13 languages. Here’s the complete YouTube playlist:

This playlist is being updated daily, as more languages are added.

Make this viral! Share it worldwide! Please post it on your websites and blogs. Invite spiritual groups to join us. If you know an alternative media outlet, you can send it to them. You can create a Facebook group for your local group of people doing this in your part of the world. You can create a video about this and post it on YouTube. 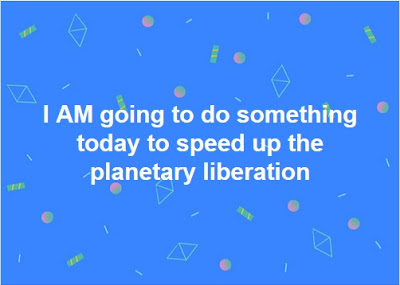